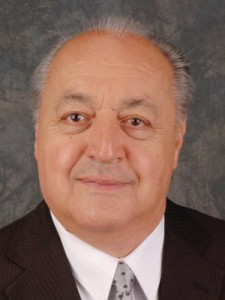 Mayor of the City of Des Plaines, Illinois

Anthony W. Arredia (Tony) was elected by the voters of Des Plaines, Illinois to his second full term as Mayor on April 5, 2005. He was originally selected by the City Council in January, 2000, to fill the remaining term of the late Mayor Paul Jung. In April of 2001 he was elected to the office of Mayor. He was also elected to two terms as 8th Ward Alderman before serving as Mayor.

Mayor Arredia has lived in Des Plaines most of his adult life. He has been married to his lovely wife, Ida Jean, for 46 years. The Arredia’s have three sons, Joseph, Charles and James, and they have 4 grandchildren.

Tony was born and raised on the Southside of Chicago, in a predominately Italian neighbor-hood. He is a 2nd generation Italian/American of Sicilian and Rigilano decent. His family lived in an apartment building along with his grandparents, aunts, uncles and many cousins. The Italian influence has been very prominent in his life and he has tried to continue that legacy while raising his children and providing family history to his grandchildren.

He has told everyone he meets that he was trained from a very young age, to appreciate hard work, loyalty, integrity and compassion toward his fellowman. He feels that it was from this training that the rewards that he has been most fortunate to attain thus far, that he is most proud. He also stresses that there is nothing more satisfying than to have both young and old alike speak kindly and admiringly about you and your achievements. This is especially meaningful when you have reached the time, when looking back on your life; you search for the highlights that make your life worthwhile.

Tony attended Mount Carmel High School. The bulk of his professional life was spent in banking. From 1955 through 1990, he worked at continental Bank and retired as the Vice President of Bank Operations, Image Technology, Management Development and Product Line Pricing Strategy. After retirement, he served a Director of the Ashbury Court Retirement Community.

Other than elected office, his community activities centered on coaching football and baseball. He was a member of the Staff at St. Viator High School, President of the Mount Prospect Football Association, served as Chairman of various Mount Prospect Park District Committees and is a certified ACP/ISHA Instructor.