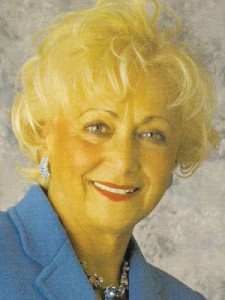 One of the most dynamic ladies of our Italian Community has honored The Italian American Executives of Transportation Club to be our “Woman of the Year – 2004.” Jo Ann is a born leader and extremely active in so many organizations that she has earned the tide of “The Energy Bunny.”

Jo Ann is the youngest of three daughters born to Joseph R. and Ella Salerno. She has been a tireless community activist for decades. This comes as no surprise, given the example set by her father, Joseph Salerno, who founded the Italian Welfare Council, the forerunner of the Joint Civic Committee of Italian Americans.

In 1961, Jo Ann married Philip Anthony Serpico. In the years to come they had three sons, Philip Joseph, Joseph Anthony and Christopher Francis.

We thank JO ANN SERPICO for honoring us by becoming our 2004 Woman of The Year.